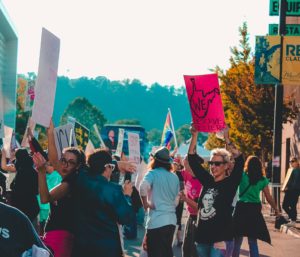 It seems like today everyone is pro-something.  If you sit back and listen to all the talk and controversy on these issues, it can be overwhelming and confusing, especially to a woman who has found herself in an unplanned pregnancy.  I’m not here to tell you which pro-position you should take; that is up to you to choose.  What I would like to do is share some stories of women that you can relate to no matter if you are pro-life, pro-abortion, or pro-choice.

I think I might be pregnant…. OK, I know I might be pregnant; I haven’t had a period in months.  What am I going to do? I can’t believe I am in this position at 14, and I am scared to death!  I can’t tell my parents, and I can’t have a baby, so if I have an abortion it will all go away as if nothing happened, right?

Jenny attempted to have an abortion. Some unexpected events took place, and she wound up at a pregnancy center.  She talked to a client advocate and found the courage to tell her secret and to keep her baby.  Jenny went on to marry and have another child, and one day grandchildren whom she dearly loves. Life wasn’t completely easy because she chose to have a baby at 14, but was able to experience many things she would have missed out on had she chosen differently.

I can hardly wait, I am almost through with grad school, and I will finally start my career. I have a trip planned this summer to go backpacking in the Himalayas!

Anita had her whole life planned out, and in the midst of planning, she found out she was pregnant.  Anita was a proud woman, and she was scared of what people would think of her if she had a baby.  She found an abortion clinic near her college, and before she knew it, she was on her way to the Himalayas baby-free.  Life wasn’t completely easy for Anita after that; she went on to have an eating disorder and emotional issues associated with guilt and regret.  In her later years, she too, visited a pregnancy center and got involved in a post-abortion support group.  She found forgiveness, and in turn, started helping other women going through the same situation she had been in years prior.

I am a 40-year-old woman – how in the world did I get in this position?

After a one night stand on her 40th birthday, Georgiana found herself pregnant.  She was newly separated from her husband, and the father of the baby was married.  She replayed that night a hundred times in her head – if only she could go back and change that night!  She can’t even imagine having to tell her husband, her parents, and most of all her children.  She felt like she was going to hurt so many people by having this baby, and she thought it would be better to take the pain on herself and just have the abortion.

Georgiana found herself at a pregnancy center sitting with a client advocate pouring out her heart. She didn’t believe in abortion, but she told the advocate that in her position it was necessary.  After talking everything out she left undecided but not so sure abortion was the answer anymore.

Georgiana made a decision that not only changed her life but changed the lives of others. Georgiana chose the path of adoption.  A couple she knew had been trying for years and had been unsuccessful in having children of their own. She took a situation she thought would destroy her life and her family, and she turned it into the biggest blessing for the couple who got to adopt her baby. Georgiana’s life wasn’t completely easy because she chose this, but she has experienced things she never thought she would. She was able to be a part of her baby’s life and watch a family grow because of the life she brought into the world.

In each story, a different path was taken, and each path had its own set of difficulties.  There are several aspects that are common in all three stories: They were all moms with unplanned pregnancies, they all experienced fear of the unknown, and they all received help from a pregnancy center.  Here at OPRC, we want to help you through the different paths you can take or may have already taken.  We have women here who understand exactly what you are going through who are ready to help.  We offer counseling on all your options, and no matter what path you choose, we will be there for you.  If you have had an abortion in your past, we offer a post-abortive support group for women.  In a world that is concerned more with which “pro” you are, we are concerned about you and what you are going through.

If you are experiencing an unplanned pregnancy or have had an abortion in the past, call us today for an appointment. We are here for YOU! 910-938-7000