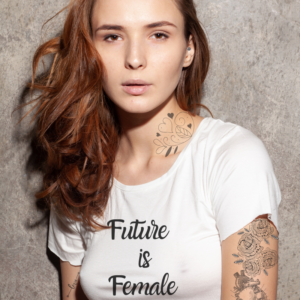 The first time I heard that phrase I remember wondering exactly what that meant.  I did some research on the phrase and found two times in history it was made famous, once during the 1970s, and it made a comeback in 2017 during the Clinton campaign.  The phrase is a product of the Feminist Movement.  The movement over the years has fought for the rights of women which include voting, equal pay, sexual harassment, and many other issues that have effected women throughout history.  However, through the years of fighting for rights, women have lost some important values and we are going to look at them here.

Over the years women have traded this in for the illusion that being equal to men makes us more powerful when in reality we have lost our identity.  Women are strong, courageous, loving, caring, and most of all-powerful.  Throughout history, there have been mighty women who were powerful not by how much territory they conquered, but how much strength they had to endure in the face adversity.  Examples of amazing women are Rosa Parks, Elizabeth Edward, Florence Nightingale, Elizabeth Elliot, as well as many more.  As women, we can’t fall prey to thinking that our desires are more important than the right to give birth, raise, and influence humanity generation after generation.

The role of women in society goes beyond having babies and keeping the house.  A society is only as good as the women who raised it. We definitely live in a period that says women should have it all: career, children, marriage, and live in a mansion.  I’m pretty sure they call that the “American Dream.”  It seems that the “American Dream” has turned into the American Nightmare. Moms aren’t at home, and it is wreaking havoc on our society.  The role of women as mothers is so important to our society. Mothers teach the next generation how to survive, prosper, and make a difference.  Throughout history, we read of great people who did amazing things, and oftentimes you will read how their mothers influenced them.

“The hand that rocks the cradle rules the world.”

Women are the future.

I don’t know how we came to believe that our natural role wasn’t good enough! How did we get to the place that we were willing to give up our place in society, our power, and our mission? The world is struggling right now; good women are in high demand. We need women willing to take back their positions, let go of their desires, and start leading this generation toward the future. Women are the future because we give birth and raise the next generation.

If you are finding yourself in an unplanned pregnancy, don’t fear! You are part of an amazing journey. We know it is scary, and that’s why we are here for you. We want to hear your story, understand your challenges, and hopefully help you come to a decision that will be best for you and your unborn child. Call us today to make an appointment. 910-938-7000